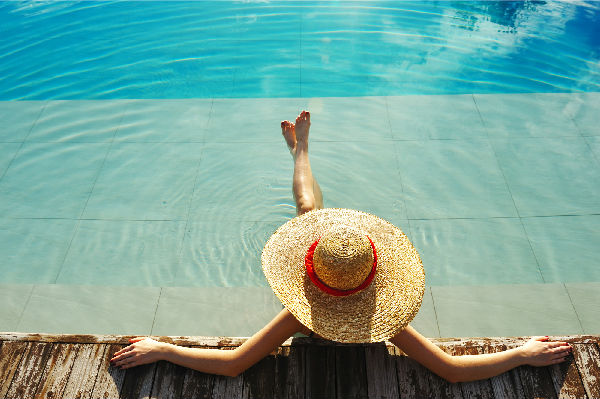 By Mark
Comments Off on Mindfulness is not… about relaxation
Mindfulness

By Mark
Comments Off on Why Mindfulness?
Mindfulness

First, let me add ‘awareness’ as a core benefit to the ‘aerobic fitness’ model I suggested previously, and then I’ll list a group of overall benefits.

Mostly our minds have, well, a mind of their own.  They dart here, which links to this, which brings up this thought, which reminds us of a task we hadn’t quite finished, which prompts us to open a new web browser window, which reminds us… and so on.  Having control over these related leaps of attention is an important part of the story;  the other part is having the awareness that your mind has wandered off-topic.

This awareness though goes beyond spotting that your mind has wondered.  It is also the awareness of how our own mind and body work – that thoughts do come and go, sensations rise and fall in our body, and emotions affect our mood.  With practice, this awareness, sometimes called meta-attention, allows us to more easily choose whether to follow a thought, sensation or emotion; or whether to let it pass, deciding not to be snagged by a negative thought and led down a path to unproductivity.

I describe attention and awareness as the big two, the two most basic skills that come from mindfulness practice.

But there are many more benefits*, often building on the big two.  For example:

And this is far from a complete list.  But, it’s worth noting a couple of things.  Firstly, that there are many ways of practising mindfulness and, different practices may emphasis different benefits.  For example, a 2012 study that compared Yoga (yes, it’s much more than stretching and postures), sitting meditation (closer to the way most people think about meditation), and a body scan technique (focusing progressively on each part of one’s body), found that:

And so, many mindfulness-based courses teach multiple practices (including our own).

Secondly, despite the long list of benefits, mindfulness isn’t a cure-all.   As with all interventions, some practices will benefit some people more than others, some people will enjoy mindfulness practice and others will not, the benefits may be more relevant in some circumstances than others, etc..

Though, one potential benefit I didn’t list is ‘world peace.’  That’s the ultimate outcome Chade-Meng Tan, the founder of Google’s mindfulness-based emotional intelligence course, sees of having enough people being mindful – hmm, perhaps it is a cure-all.

*Many of the research studies related to clinical topics, such as pain management and depression.  For example, Mindfulness-Based Cognitive Therapy (MBCT) is recommended by the National Institute for Health and Clinical Excellence in the UK for those who are at risk of relapse into depression, and so available through the National Health Service. 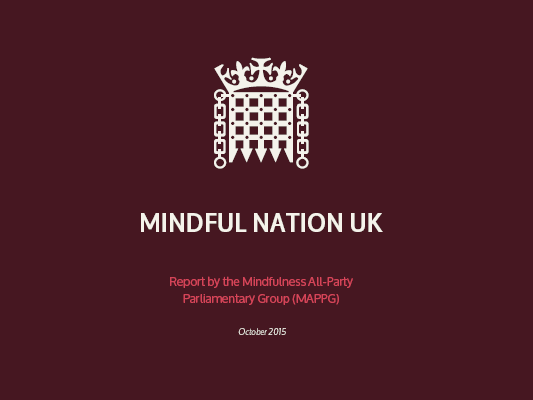 By Mark
Comments Off on The UK as a mindful nation?
Mindfulness

The UK as a mindful nation?

Yesterday (20th October 2015) in the UK a somewhat unusual report was published.  Coming from the Mindfulness All-Party Parliamentary Group (MAPPG), following eight hearings in parliament and over a year of research, the report, Mindful Nation UK, makes recommendations about teaching mindfulness in the workplace, education, healthcare and even in the criminal justice system.  Not the kind of research I ever expected to come from parliament!

OK, being formally trained in psychology and as a mindfulness teacher, I’m perhaps a bit more excited about the recommendations of the report than most.  But then, although mindfulness is not a panacea, I’ve witnessed how the mind skills that it helps develop can be of real benefit in life and work.  So, what does the report recommend?

Here are some examples:

And in all cases, further targeted research should be used to forward understanding and good practice.  The report also sites a shortage of teachers that have been trained according the UK Network for Mindfulness Teacher Training guidelines (the guidelines that our teachers are trained with and follow, naturally :-), see here), at about 2200 in the UK, and 700 for those in clinical practice.

If you’d like to read the full report, you’ll find it here.  It’s 66 pages without appendices, though it’s well structured.  So if you main interest is in, say the the workplace, then you can read pages 39-50. 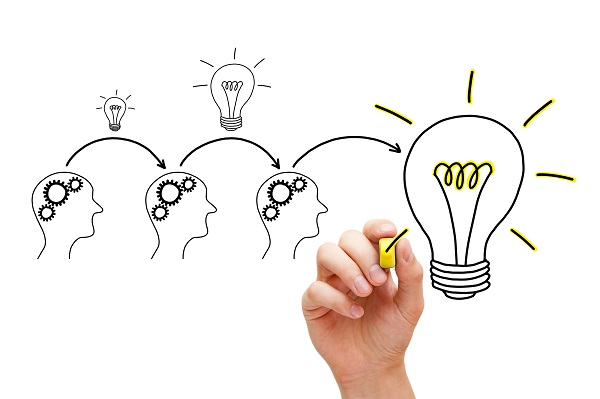 What!?  It’s counter intuitive, but if you want your children to continue to learn and grow, more than three decades of Prof. Carol Dweck’s research suggests that telling them that they are clever is not a good long-term strategy.  In fact, in the long run, the ‘you’re clever’ strategy could actually hold them back.

I first came across this idea in 2007 (I think it was via this article in Scientific American).  It’s one of the outcomes from an area of research related to learning mindsets, covering a spectrum between two polls – a fixed mindset and a growth mindset.

Do you think it’s possible to get smarter than you are already?

Your answer to this question may provide some insight into your own learning mindset.  In super summary, those of us with a fixed mindset tend to believe that ‘we are the way we are’ – using school subjects, perhaps “I’m just not good at maths, what’s the point” or “I’m just gifted when it comes to languages, I’ll stick with that.”

Whereas those of us with a growth mindset tend to believe ‘we get smarter through effort and support’ – perhaps “I’m just not good at maths, yet” or “I do find it easier to learn languages than some, and I’m working really hard at maths so I can be good at that too.”

In a recent article in Education Week, Prof. Dweck points out that it isn’t just through effort that we become smarter.  Although that’s a key ingredient, putting a great deal of effort into the wrong problem solving strategy may be a waste, especially if there was someone who could have helped you find a better one.

There is certainly much more depth to learning mindsets than is portrayed here, or in the linked articles and Prof. Dweck’s book Mindset: How You Can Fulfil Your Potential offers a more comprehensive view.  And I include mindsets (learning and other kinds) in the work I’ve done with schools, and in the workplace (yes, adults have learning mindsets too).

So, how should we support our children?  Well, Prof. Dweck’s article in Education Weeks ends with this:

If attending a face-to-face course isn’t practical or your preferred approach to learning about mindfulness, then here’s a great alternative.  Our next Core Mindfulness Online course runs over 8 weeks, with 75 minute sessions running each Tuesday evening (19.00 UK time), from 2nd June through to the last session on 21st July 2015.

We’re using Eventbrite to manage the online booking process for us, so you can read more, and join the course by visiting: http://mindfulnessonline.eventbrite.co.uk.

What others have said…

This course has helped me in both professional and personal areas. My concentration levels have improved, helping to to grasp more complex concepts.

Thanks very much for this course! I have learned a lot & feel a better person for it.

I am better at seeing my stress, taking the time to understand it and respond differently.

By Mark
Comments Off on How can mindfulness impact resilience – 2
Mindfulness, Resilience

How can mindfulness impact resilience – 2

Here’s the next part on how mindfulness practice helps build resilience.  Continuing the theme of the ‘resilience tank’ from part 1, which described making better use of the resilience you have by reducing the impact of stress (turning off the tap quicker).  In part 2 we look making the tank itself bigger!  You’ll find the post over on LinkedIn.

By Mark
Comments Off on How can mindfulness impact resilience – 1
Mindfulness, Resilience

How can mindfulness impact resilience – 1

Resilience – build it before you need it

I’ve just posted an initial article on Resilience.  It’s a broad topic affected by everything from our mood, to life experience to gene expression – but critically, there’s lots of evidence (including my own research) that we can build mental resilience at work, but perhaps not in the way you think… take a look.